The area just inside Poole harbour entrance, to the south, known for wildfowl and wader watching in winter

The purist will tell you that Brands Bay is a specific area of south eastern Poole Harbour but I am using the name to identify an area of the harbour from the south of the harbour entrance, the Shell Bay side of the car ferry terminal, around to the point where the coastline becomes inaccessible as it is private estate with no access. My 'Brands Bay' is much bigger then the actual 'Brands Bay'!

Being at the eastern end of the harbour, near the the entrance, tidal flow is much stronger and faster than up at the western end and so the habitat is very different to the areas around, for example, Holes Bay and Lytchett Bay. There is very little saltmarsh here, more mud, sand and stone. When the tide is out large expanses of mudflats are exposed and waders, ducks and geese are quick to take advantage but as the tide comes in and it covers quickly the birds fly west to the saltmarshes further in land. I have also included my records for the strip of heathland that runs to the west of Shore road down to the coastline as, to access the shore, you need to cross parts of this heath which is, technically, part of Studland heath!

In trying to categorise somewhere it is not always possible to match it to existing names, it makes more sense to change things around a bit. Sorry! 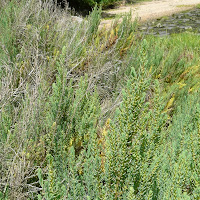 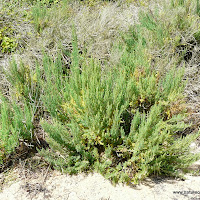 Shrubby Seablite
The number of species recorded per species group: