Lying to the north of the River Frome as it heads out from Wareham along its channel in to Poole Harbour, Bestwall Marsh, Swineham Point and the gravel pit are popular with local birders in winter as the range of habitat can produce an interesting array of wildfowl and wetland birds. The marsh is damp, drained grassland that floods readily after heavy rain and to the left of the path there is a large finished gravel extraction and many ducks and geese gather there. At the end of the path you find a large reed bed at Swineham Point which is home to several Cetti's warblers as well as reed and sedge warblers in summer. This is a good spot for marsh harriers in winter and also osprey in the autumn.

The influence of the marsh and river means there is a varied flora and the cleanness of the air enables lichens to thrive and the shrubs alongside the path are festooned with them; it is worth the walk just to see them!

In winter the path can become very muddy in places so make sure you have the right footwear. The fitter naturalist may want to turn this into a circular walk and take in the north bank of the river Frome from near the Priory Hotel and then on to Swineham Point and around the end of the gravel pit and back across the River Piddle water meadows to the Wareham Walls and in to Bestwall Road. This is a documented, guided walk called "The Two Rivers Walk". A leaflet is available from the library in South Street I believe. 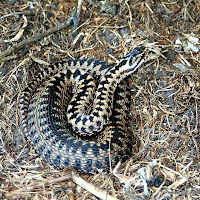