A small nature reserve but is a picture in spring with a carpet of wild flowers to see in a beautiful setting.

Loscombe is a delightful hamlet lost in the heart of west Dorset, a few miles north of Bridport. It has a very narrow, winding road in and another out! Parking at the reserve is almost non-existent but as it is so quiet there it is unlikely to be a problem.

The reserve is not large but is a picture in spring with a carpet of wild flowers to see (including the rare Snakes-head Fritillary which was, unfortunately, over by the time we got there).  The main area of the reserve is unimproved pasture with ancient hedges but there is also a marshy area and a stream as well as a nearby mill pond. It can be pretty damp in places which can make accessing some parts of the reserve difficult without wellington boots if it has been raining recently. This was the case we visited and so our visit did not reach all parts of the reserve.

A lovely, quiet part of Dorset, well worth a visit. 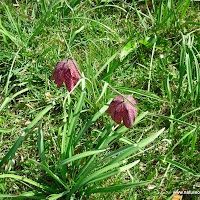