A fairly small area of dry heath offering a glimpse of how much of the surrounding area looked before it was subject to gravel extraction!

Drive along the Puddletown Road from Wareham to Bovington and you pass gravel pits on either side. What was once heathland is now a series of scars; holes in the ground. To see what the whole area was once like take a trip to Worgret Heath. Worgret Heath is a south facing escarpment of classic heath habitat that has, in general, escaped mineral extraction activities. Take a walk around and imagine what the wider area was like just after the war before we started excavating the gravel. It is a delightful little cameo of a once major lost heathland.

Home to sand lizards and smooth snakes the site is now managed by the Amphibian and Reptile Conservation Trust (ARC) as are a number of other priceless heathland areas around Purbeck. At first you might be somewhat horrified to find swathes of vegetation cleared by a bulldozer leaving sandy tracks across the site. Do not panic! This is all part of the site management plan. Clearing these tracts of gorse and heather releases the underlying soil which is ideal for sand lizards to lay their eggs in. Plenty of heather, gorse and bracken remain to provide cover for the adult animals and to provide insect food for them to eat.

Worget Heath is not a large site (unfortunately) but is well worth a visit in mid or late summer although you probably will not see reptile species as they can make themselves very scarce! The area lies between two main roads with no parking so park up by Holmebridge and follow the signposted Purbeck Way footpath and that will bring you to Worgret Heath in under half a mile. My species list and photographs includes this stretch of approach path which has interest in its own right after you pass under the railway bridge. The heath itself can be quite difficult walking in places.

Worgret Heath
50.683386018663, -2.1510660763854
Amphibian & Reptile Conservation, Open Access, Site of Scientific Interest
These are the habitat types that MAY be present on the site based on the species recorded there (top 10 only shown):
These are the number of species for NVC codes on the site - it DOES NOT mean that the NVC community is actually present on the site: it might be! (Top 10 only shown):
Site Notables
Displaying 1 - 2 of 2 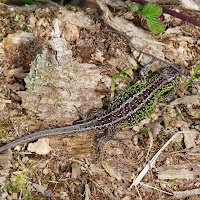 Smooth Snake
The number of species recorded per species group: